In this practice log I am going to collect my work relating to a certain muscle: Levator labii superioris alaeque nasi, „lifter of both the upper lip and of the wing of the nose“, also called „Otto’s muscle“ (from here on just „the muscle“). I suspect that the tonus of the muscle has an impact on my practice of mindfulness of breathing.

The reason why I put my musings in a practice log is twofold: Firstly, I want to up the ante – – exposing my progress to a public should increase my diligence. I feel it’s worth it; I hope it works. Secondly, working with the body is imaginal practice, and by writing about the phenomenology I intend to help me to imagine more skillfully.

Above image shows the muscle in bright orange. It runs the full length of the nose, from the nasal root down to the upper lip. There are two of the same kind, one on each side of the nose, but it’s the right one which tells me I should care more about it. I have removed some other muscles on the right to show where it is situated.

All kinds of things we do with our central part of the face are mediated by the muscle: flaring the nostrils, dilating them, snarling, but also (and for the purpose of this log) really ephemeral twitches and ticks alongside and deep in the nose, both volitional and spontaneous.

Backstory: On a retreat, a couple of years ago, I noticed that I am able to make a certain internal movement with (what I then thought) my eyes which helped to generate piti. The image I had in mind was that the parts between the eye and the nose pushed or sucked inwards. It’s wildly exeggerated, but the image below can give you an idea about the energy and the direction of this „vortexing“. 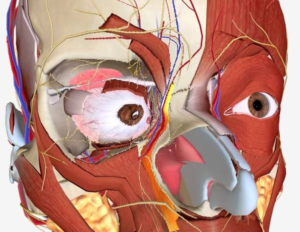 The vortex somehow obscured my thinking and somehow opened me up towards samadhi. But in the end it felt too muffled and the prolonged holding was too painful to be used as a valid samadhi trigger.

For the last months a big part of my practice was whole-body breathing to get into and stay in samadhi, less so detailing the minute sensations coming along with the breathing. For quite a while now, though, there has been an urge to swing back to a more vipassana way of meditating to work on countering dullness.

Recently I have thus been blowing up the magnification of the sensations of breath in the nasal passageways… and there is a kind of intermittent holding around or in the nose going on, both for the in-breath and the out-breath. It occurs somewhere on the stretch of the two directional breaths, usually in the first half. It’s as if the moving breath slips into a groove which leads to a build-up of energy and subsequent release into a very brief but palpable bracing. This slight moment of constriction is accompanied by a blank-out of the awareness of the breath sensations, a very brief disorienting drop in one-pointedness.

And this is actually happening all the time, for many if not most of the in- and out-breaths, on and off the cushion. It might have been going on for I don’t know how long, barely above the threshold of perception.

From what I have been able to ascertain this contortion does not emenate from any of the eye muscles (as I had originally suspected on the retreat), but rather from the area where the said levator muscle does its work. This might be the reason why I had never been able to really get a handle on what’s happening behind the vortex-like samadhi trigger. It sometimes above the horizontal middle axis of the eyes, sometimes below, sometimes with a muscular touch, sometimes felt more in the sinuses… but always having this quality of holding, of bracing myself.

The newfound blank-out has the same felt sense, only happening involuntarily and transient. Knowing that the „vortexing“ was efficient but ultimately a strained dead end, I would now like to understand the related micro-movement better – – and defuse it, if necessary.

My plan for practice is to feel my way into the structure of the contortion, to find out what the conditions are for its onset, for its duration and for its passing. I intend to look for ways of sensing and possibly also breathing which reduce the strain, with the hope of making the contact of awareness and breath at the tip of the nose more continuous, without the blank-out.