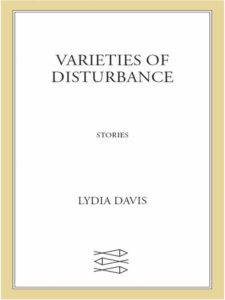 The story above was published in Varieties of Disturbance (New York: Farrar, Straus and Giroux, 2007). The collection contains many other pieces which are also only a couple of sentences long – – microscopic examinations of language and thought. It’s this „micro-fiction“ Davis is renowed for, as evidenced by the Booker International Prize and a MacArthur Fellowship for fiction. Siddhartha Deb in The New York Times: „Davis wants us to engage in a minute scrutiny of language, to pay attention to the valence of words and the logic of syntax for what they reveal of character, interiority and story.“

Davis writes about little, trivial moments in our daily lives. It often feels like a meandering around details which are hidden from plain sight, but at the same time vaguely familiar and intimate. Amanda Claybaugh writes in an essay about Davis that „[she] has demonstrated a commitment throughout her career to writing about the ways in which the self always must grapple the difficult process of translating mental activity into language.“ This straining pervades also Getting to Know Your Body, where Davis „presents the reader with an eerie pair of aphoristic (and almost syllogistically structured) declarations“, as Claybaugh puts it.

I was made aware of Getting to Know Your Body by a post and a repost on Reddit. One redditor offered authentic praise: „This unassuming tip has elevated my practice immensely. I was pretty skeptical at first, but decided to give it a try and I was not disappointed“.1)This pretty much matches my experience with from working with Getting to Know Your Body.

As it is often the case with reddit, a lively discussion ensued. Many redditors followed the advice, used Davis‘ story as a practice instruction and equally found it surprisingly effective. The consensus: It’s a tool for those who struggle to watch their thoughts.

Others were careful to point out that „absence of thought“ shouldn’t really be looked at as the end goal of meditating. It’s not about shutting out thoughts but rather be aware of the thoughts, let them come, let them be, let them go. One of the redditors summarised her views as follows: „We’re not trying to be without thought, but nurture a better relationship – awareness, acceptance, and compassion – with our thoughts. No-thought is obviously nice, and does anchor non-conceptual awareness, but most of us aren’t going to be living our day to day lives with no thought. Meditation is the training for every day mindfulness.“

We can also take comfort in the fact that gazing meditation techniques are nothing new. Redditors mentioned Trataka, which means „steady gazing“ and which is one of the oldest types of meditation. It can be done with eyes open or closed, with a support like a candle flame or with simply resting in the field of awareness. Yoga knows a number of Drishti where the eyes are directed to places on the body or elsewhere. The Bhrumadhya Drishti (in the yogic tradition also known as Shambhavi Mudra) is a technique where the practioner focuses the eyes at the „3rd eye“ between the eyebrows. Gazing upwards and inwards locks the eyeballs in place which is known to help concentration.2)In my opinion the mudra/drishti is quite effective. Note, though, that it is straining the eyes quite a bit, so make sure that you get enough rest. It is easy to misunderstand Yoga instructions, so you might want to check with Youtube to see practioners actually doing it.

I think the following quote summarizes nicely the potential therapeutic benefit which might come from such practices: „Voluntary thoughts are fine. However, most people prefer to avoid involuntary ones, especially when you find it problematic to stop them once they’ve begun… Thinking is not bad, but for some of us, overthinking is at the center of a lot of problems. Taking a break from obsessive thinking is not only a pleasant relief, but it also has an indirect effect on allowing the mind to actually process what it needs in order to handle stressful situations.“

The range of comments reflect the different views of meditators on how important it is to calm the mind. Most of the commentators, though, also the ones who refuse to entertain the idea that Davis be on to something, seem to read her story as a recipe to stop thoughts.

But is this the same like saying that „movement of body implies movement of mind“, as Claybaugh puts it? Davis is known to be meticulous when it comes to syntax and semantics of her stories, so let’s take a closer look.

Apart from the title there are just two sentences to unpack. Both combine „thinking“ and „eyeballs“, the first into a „thought detector“, the second seems to be a „thought eraser“.

For the „thought detector“, Davis posits that we can infer from any eyeball movement that there is a stirring of thought behind it. Try this during meditation: Focus on your meditation object (like the breath) and when you lose it switch to the eyeballs movement and see how it works when you have thoughts or no thoughts.

Davis doesn’t tell us anything about how big the „saccades“ are, i.e. how far the eyeballs jump. She just posits that there are saccades happening while you think.3)The relationship between micro-saccades and attention is fascinating and a worthy topic for another post. Note that Davis refrains from asserting a causal relationship, so the syntactic structure of the first sentence would also be compatible with an underlying mechanism which drives both thoughts and saccades. Both would be correlated, without making either one the cause of the other. Even thoughts without saccades wouldn’t contradict the rule. They would just tell us that the thought detector is not perfect, with some of the thoughts flying under the radar, undetected.

At first sight, the second sentence, the „thought eraser“ seems to be a more definite prescription: pacify eyeballs ⇒ thoughts stop. But I am not sure that this is what Davis really means. We can read the „try“ as a warning that it might be difficult to stop the saccades, but we might also read the whole sentence differently: Could it be that not only successfully stilling the eyeballs but even just trying to do so is enough to pacify the thinking? And how does „not wanting to be thinking“ relate to no thinking?

The elephant in the room for both sentences is of course the chimeric word „thinking“. Rather than „thoughts“, Davis chose a word form in line with everything happening in this present moment. Thinking is happening, without necessarily needing a Self to do it. But who is then the „you“ in the two sentences and in the title? Furthmore, trying and wanting are obviously also thoughts, so how can you put the receipe in action by wanting something and trying something but at the same time doing neither?

So does the detector really detect, and does the eraser really erase? The two sentences give no conclusive answer. Does Davis give us a tool to use in meditative practice, or is this more an insight about how deeply linked mind and body are? Language can elucidate this kind of interplay between body and mind, but those musings are philosophical quicksand. I don’t agree with one redditor who thinks that the story is „a logical fallacy which places undue importance on eye movement’s role in regulating thought“, but I can understand where he is coming from.

I believe that Davis is pointing to a secret, mystical truth, but something we can experience right now. The recipe shows us a way to hold a particular relationship between body and mind in awareness. If we lean into it and let go, we oscillate between detecting thoughts, generating intention and stilling mental stirrings. The story points to the fact that I am not my inner monologue.

When you mindfully realize that you’ve been carried away by distracting thoughts, can you feel an echo of those thoughts in your eyeballs? There might be an urge to continue the thinking, maybe just for a moment, to complete the thought. Can you counteract this, by focusing on the eyeballs and stilling them? Just being aware of your eyes will already crowd out many distractions.

Remember that it’s not the thoughts that move your eyeballs. It’s just that when you are about to have a spontaneous thought, your eyeballs are also likely to move spontaneously. Suppressing the saccades thus doesn’t impact the thinking directly but rather reduces the „wiggle room“ for stirring thoughts. It’s all about holding this fact in awareness and connecting to a felt sense of thinking acting out in the eyeballs.

As Davis tells us in the second sentence, you need to want to calm your mind, and you have to try to do it by pacifying the mirroring body. There are no automated pathways; you are not a mechanical device. You need to be ardent, alert and mindful. Both intention and action are the co-dependent causes and conditions for stillness.

I think that Katherine Hill from SFGate has it right: „Davis‘ hallmark is the story as logic poem, often as short as a page or a sentence. Each word is chosen with care, and then expected to perform to its fullest capacity. While many contemporary writers possess vast knowledge, few have Davis‘ rare ability to compress and crystallize it… She proves that one sketch, if written by her, is enough.“